The difference between principal vs. principle can be very confusing in English. The word, principal, can be used as an adjective or noun while the word principle is always a noun. The misuse of principal and principle in writing is often overlooked because it is too common to mix them up.

In this article, we break down the different uses of principal and principle in the English language and give some examples of the uses in our daily lives. We were likely taught this difference in English classes; though, we all seem to forget and commonly misuse the words. We think it is easier to memorize the meaning of principle and assume the rest of the uses should be principal. Though the word, principal, can be used in various contexts and we hope to help you learn those as well.

What Does Principal Mean?

Furthermore, the principal can also be used in finance as a term to describe an originating loan amount which interest is accrued and charged on over several fiscal periods. 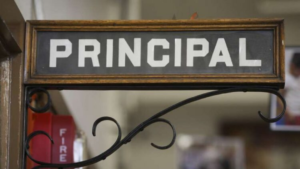 What Does Principle Mean?

The definition of principle is a law, theorem, or doctrine.

One studies the principles of economics in the intro to economics and applies them throughout their studies.

There are also Generally Accepted Accounting Principles (GAAP) which give rules to Accountants that help them have clear and accurate financial statements.

Physics and chemistry have thousands of principles that are scientific theories such as the theory of relativity, but there are also principles in love and religion. The four noble truths of Buddhism are another set of great examples of principles. Principles can serve as guides or rules. Therefore, it can be difficult to discern if the term is referring to a punishable offense or a guard rail.

It would be impossible to list all of the different types of principles you encounter in your life. We hope that you continue to use Capitalize My Title to follow style guide principles when capitalizing your titles. These principles will help you in your writing and ensure professional quality.

Conclusion on the Differences of Principal vs. Principle

We hope you will continue to come back to this page as a reference. The words principal and principle have been confusing students and people of all backgrounds for years. The principal mantra in life is “just google it.” Our memories are fallible and we are happy to help remind you of the difference between these two uses and spellings.