Using active or passive voice in the construction of sentences is a characteristic that makes the English language distinct. Whether writing for formal speeches or delivering conversational messages, these two voices are often used to convey a message.

The use of passive and active voice holds a clear difference in the English language, and it is something that may confuse most writers, including native English writers.

Passive voice was prominent in academic or scientific writing throughout the twentieth century. However, this has significantly changed, and today, many writers prefer using active voice to be more concise and clear. Even students at several American schools are taught to avoid passive voice because it makes the writing weak.

Making a choice between passive and active voice entirely depends on the conventions of the discipline in which you are writing and the ideas you are trying to convey. For some writing, the passive voice can be a more sophisticated and appropriate choice than the active voice. But, in most situations, an active voice is a better option as it makes the sentence stronger and easier to understand.

In this article, we will understand the clear difference between active and passive voice and when to use it.

Difference Between Active and Passive Voice

To further understand what subjects and verbs are, we have to take a look at some examples.

The bird is flying in the air.

In the sentence, the bird acts as the subject while flying is the verb.

Jomar sent another proposal to his client.

In the sentence, Jomar acts as the subject who does the verb, sent.

After identifying the main components of the sentence, you have to examine the relationship between the subject and the verb. You have to gauge whether the subject performs the action, or it is being performed by something else. This is where active and passive voice come in.

What is Active Voice?

The active voice is one of the most familiar voices used in English writing. This voice describes the subject of a sentence performing the action. Sentences in active voice have a direct, strong, and clear tone. Here are some of the common examples of active voice used in a sentence:

In all three sentences mentioned above, you will notice that the main subject of the sentence is describing an action like writing, running, and waiting. Additionally, you will also see that the verb is happening to the object of every sentence. Another simplified example of an active voice is Nike’s famous slogan – “Just Do It.”

What is Passive Voice?

Passive voice is not that common, although many students accidentally insert it into their essays. This voice is used when, in a sentence, we want to put more stress on the action instead of emphasizing the subject. In addition, passive voice can be used when discussing the universal truth or fact. Here are some passive voice examples used in a sentence:

You will notice that the above examples include the word “was.” It is used to form a sentence with a passive voice. So, you use words like “was chased,” “was eaten,” “was written.” You can also use the words “to be” with the past participle to form a passive voice. Overall, you will observe that passive voice sentences are unnecessarily clunky and wordy, making it more difficult to understand.

How to Remember the Difference?

In general, active voice is mainly used for day to day writing purposes to make the sentence more direct, simple, and easy to understand. Whereas, we primarily use the passive voice in stylistic writing or legal writing. 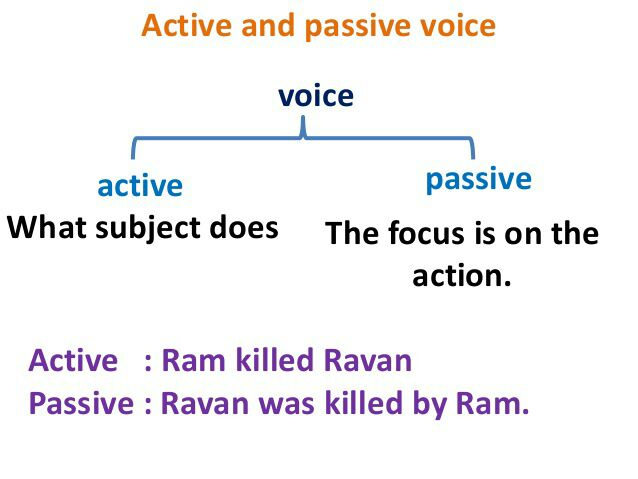 Examples of Passive vs Active Voice

To further understand the difference between the two, we try to look at several examples of passive and active voice.

Passive voice: The certificate is received by the student.

If we try to analyze the sentences more, we can also see that the active voice is more concise and more direct than the passive voice.

Let us take a look at another example and try to study it.

Active voice: The teacher demonstrated the lesson in such a way that the students understood.

Passive voice: The lesson was demonstrated by the teacher in such a way that the students understood.

The sentences above are more complex than the examples given earlier, but it is still relatively easy to spot which among them is in active voice and passive voice. In the first sentence, the teacher is highlighted. It was also clear that the verb used was demonstrated. In the second sentence, the lesson – or the object of the sentence – is given importance. The teacher, who serves as the subject, was only stated after the verb has been stated.

There are instances when the subject cannot be identified, hence the use of passive voice is more proper. Let us take a look at this example.

In this sentence, we can feel a sense of mystery since it was not stated who retrieved the flash drive. If a subject is not identified, then the passive voice may be used. We cannot just say someone as the subject.

But this is not the only instance when the passive voice can be used.

In the example above, you may want to be discreet by not naming the subject of the sentence. Hence, you could use passive voice. Using active voice on the sentence only shatters your tactfulness.

Passive voice: Her proposal has been rejected by the client because of lack of expertise.

Active voice: The client rejected her proposal because of lack of expertise.

You could also use the passive voice – like the example above – when you want to highlight the action rather than the subject. Since the term rejected is more powerful than that of the client, it should be given more emphasis.

Passive voice: The papers should be given not later than Thursday night.

Active voice: You should give the papers not later than Thursday night.

In certain instances, you could use passive voice when you want to create a tone with authority. In the sentence above, using the active voice would just make it less authoritative.

Active voice: The bamboo waved as the breeze blew softly.

In addition to this, using active voice would keep your readers interested in what they are reading. Since your output is short, they are lead to believe that they will gain more information rather than those unclear ones.

Why Use the Active Voice

In other cases, using active voice will also add impact to your sentences. Since they are shorter, your sentences become sharper and clearer, giving readers the chance to visualize what is really happening.

When to Use Active and Passive Voice

However, there are instances when passive voice is required in a sentence. We can take the example of the sentence mentioned above – “the squirrel was chased by the dog.” This passive voice sentence structure would be helpful if the focus of your writing is the squirrel instead of the dog.

As a rule of thumb, you should try using an active voice in the majority of your sentences, except when there is no other way to form a sentence.

You can easily change passive voice sentences to active voice by following the points and examples given below:

Example (from passive): The file was sent by the manager.

Example (to active): The manager sent the file.

Substituting a passive verb with an active verb

Example (from Passive): The river water is sent into the pipes.

Example (to active): The river water flows into the pipes.

Adding a ‘subject’ for the verb

Example (from passive): The procedure was ruled out.

Example (to active): The manager ruled out the procedure.

Tips for Active and Passive Writing

Trim Down the Words

It’s important to keep in mind that using extra words in a sentence makes reading difficult. You should avoid it, especially when creating content for your valuable as well as potential customers. You can use an active voice whenever possible, to make the sentence more clear and concise.

Before completing an article or post, good writers always make sure that there are no issues with it. Also, at the final polishing stage of writing, you can keep SAT (Subject, Action, and Target) in mind, and make changes to the article, accordingly.

Below are some sample sentences that you need to decide whether are written in active or passive voice.

1. My manager had given me feedback about my performance.

3. He will receive an Oscar.

In writing essays, it is important that you pay attention to the voice and one of your sentences. Doing so could help you improve your performance as a writer. In addition to this, your output becomes much easier to understand, attracting more readers along the way.

You will find both active and passive voice everywhere — all you need to do is look for it and pay attention, especially when reading, watching TV, or listening to the radio. Try to spot the difference between passive and active voice and try to tell why each voice was inserted in a particular sentence. This will help you to differentiate between the two voices clearly and make your writing more concise and easy to understand.

Always remember, excellent writing should not only flow seamlessly and be clear and distinct, but it should also be free from confusingly long sentences and unnecessary words.

Verbs That Start With N