Home Editing Grammar Tips Is “Is” a Verb?

“Is is a verb?” is a question  that may remind you of the famous quote from Shakespeare’s Hamlet “To be or not to be.” Because, in this case, “be” is a verb. And therefore, yes, the word “is” is a verb. In the next paragraphs to follow, you may have an understanding of why we came to that answer.

What Is a Verb?

To keep it simple, a verb is an action word used in a sentence. Actions can involve nouns to describe what is happening. Such as:

There are different types of verbs. Let’s take a look at the following sentences:

Fun Fact: Using the correct verb form or type of verb with your subject is called subject-verb agreement.

Yes, the word “is” is indeed a verb. Some people mistake it as another part of speech because it doesn’t perform any action. Instead, it functions as a linking verb and an auxiliary verb. Moreover, the word “is” is the state of being a verb, meaning it is the third-person singular present or singular form of “to be,” the most common verb you use in writing or speaking the English language.

You’ll find the word “is” used with singular subject pronouns and non-countable nouns or collective nouns.

These are all examples of the verb “be,” and we can look at it the same way when we describe an action.

Can be compared to:

You may be thinking that “is” isn’t directly a verb. And yes, because it doesn’t necessarily follow the same rules as other verbs and doesn’t describe actions. The next section may convince you that “is” is a verb.

A linking verb can is when you connect a subject to its complement or description.

An example of a linking verb is “The water looks blue.” But if you replace “look” with “is” then it would be “The water is blue.” Therefore, “is” is linking the noun to the “complement.”

As mentioned earlier, you can also use the word “is” as a helping verb or also known as an auxiliary verb. When you make “is” a helping verb, you are connecting it to an action in a sentence.

For instance, if you combine it with a present participle of the main verb (a suffixed form with -ing ending), you create a present these or present progressive tense statement.

Fun Fact: If the main verb and helping verb work together, you will call it a “verb phrase.”

Other Words in Question

As you have read through all the explanations and examples, we hope you are convinced that the word “is” is a verb. There are many uses for “is,” whether it’s a linking verb or a helping verb.

Just a reminder, “is” can be used in many tenses and can describe actions, adjectives, and nouns. Keep this in mind as you form your sentences as it “is.” If you have any questions, please leave them in the comments section. 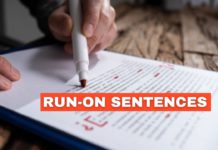