Home Editing Grammar Tips What is an Oxymoron?

An oxymoron is a figure of speech combining two words that seem to contradict or oppose each other. This combination of contradictory words is referred to as a contradiction in terms. According to Merriam-Webster, an oxymoron is a blend of incongruous words. For example, cruel kindness.

As a literary device, there are plenty of uses for oxymorons. For example, they are used to enhance a concept, create an impression, and even entertain the reader. Renowned novelists use oxymorons to create drama for their readers, whether to laugh or to wonder. 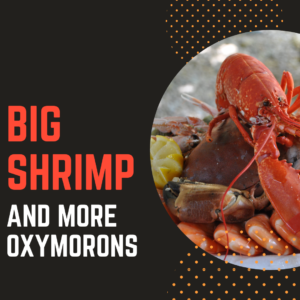 Shakespeare also used oxymorons in one of his most famous plays, Romeo and Juliet. In one line, he wrote, “parting is such sweet sorrow.” You can see the use of oxymorons in various other notable works of literature such as Jane Eyre by Charlotte Brontë, The Call of the Wild by Jack London, Funeral Blues by W.H. Auden, The Catcher in the Rye by J.D. Salinger, and more.

Let’s take a look at some common examples of oxymorons we use in everyday conversations.

Usage of Oxymoron in Sentences

You can find the following examples of oxymorons in everyday conversation and writing.

Why Oxymorons are Used in Writing

Writers use an oxymoron to get the reader’s attention by pairing contradictory words. Such words often cause a reader to pause and think about what the writer is trying to express. An oxymoron helps writers make their readers understand the concept in an enjoyable manner.

Let’s get to know about some different usage of oxymorons in writing.

Oxymorons play a vital role in creating drama in writing. Writers achieve it by pairing two words that express a significant difference in quality. For example, if a character has a “sad smile”, it produces a dramatic outcome because, generally, smiles are not associated with sadness. This dramatic effect leaves readers in suspense to wonder why the character is giving such a response. However, writers must use oxymoron wisely as sometimes its overuse can distract the reader.

A lot of writers use oxymorons in their writings to create humor. For example, if a character is portrayed as a “man child”, it will create a humorous image of a child that looks like a man or the other way round. In both ways, a man behaving like a child or a child acting like a man is a comedic event.

The following phrases are perfect examples of humorous oxymorons.

Dramatic irony in writing creates suspense or tension for the audience. It stimulates emotions in readers and inverts their expectations. Additionally, it makes the audience stop and thinks about what has been said just now.

Oxymoron has a significant role in expressing a sense of irony. Depending on how they are used in a speech, phrases like business ethics, marital bliss, and military intelligence can indicate irony. While these word pairings are not naturally opposite, their notions may seem conflicting when combined.

Creating a perfect oxymoron requires good linguistic skills. Simply pairing two words that are opposing each other won’t make an effective oxymoron. There must be an underlying meaning to the oxymoron phrase you create. A writer needs to be aware of which two contradictory words will work together to affect the reader.

There is a lot of confusion about Oxymoron and its usage. Let’s discuss some major ones.

Are Oxymorons and Paradoxes the  Same?

The paradox is a literary device that features opposing ideas in a statement or group of statements. However, unlike oxymoron, it makes sense of practical reasoning. Furthermore, it usually leads the reader to an underlying truth. See the following example.

The best way to earn money is to spend money.

On the contrary, the oxymoron literary device is a condensed paradox. It includes only a couple of contradictory words, which are paired together instead of a full statement of ideas. Though these phrases can be figuratively true, in reality, they are not. See the following example.

This comedian is seriously funny.

Can We Call a Person an Oxymoron?

An oxymoron is referred to as a set of opposing words used to express humor, drama, and irony. It can’t be used to describe a contradictory person.

It’s worth mentioning that oxymoron and moron words have little in common except that the two words come from the Greek words for foolish (moros).

Oxymorons are an ideal, thought-stimulating tool to use in writing. They have an essential role in the literature to create an impression and entertain the reader. We hope this post gives you adequate knowledge about oxymorons.