How many words should I write per day? It’s one of the most asked questions by aspiring writers. Though we do not recommend any specific word count, we do believe that every writer must have a set goal for daily word count.

Having a daily goal is vital for writers who are working on long term projects that need regular work. For instance, if you’re writing a novel, you can create a daily word count goal of 500 to 1000 words. It will help you make your long-term goals achievable. Moreover, you will feel like you have accomplished something every day.

In this post, we’re going to familiarize you with a daily word count of some famous writers. So without delay, let’s get started.

Born on September 21, 1947, Stephen Edwin King is an American author known for his horror, suspense, and fantasy novels. King’s work has been adapted into television series and films as well.

Stephen King is considered to be one of the most productive writers of all time, as his fantasy novels and supernatural fiction are incredibly lengthy. However, it does not mean he composes a massive number of words every day.

In his book On Writing: A Memoir of the Craft, King has clearly written about his writing speed. He has mentioned that he sets a daily target of around 2,000 words. According to Stephen King, 3 months should be the maximum time for anyone to finish the first draft. If it takes longer, it will be harder to dig back into the story.

Thomas Clayton Wolfe was an early twentieth-century American novelist who was famous for blending poetic and impressionistic prose with autobiographical writing.

Wolfe wrote four novels and numerous short stories. Two of his famous books include The Bonfire of the Vanities and The Right Stuff. These books were later made into films.

Unlike some contemporary authors, Wolfe never appeared in a rush to end his novels. You won’t believe it, but it took him 11 years to finish his book, “A Man in Full.”

Ernest Miller Hemingway was a renowned American novelist and short-story writer who received the Noble Prize in Literature in 1954. He produced most of his work between 1920 and 1950.

Of course, Hemingway is not alive now, but while he was, he used to hang around writing 500 words per day. In an interview with George Plimpton, the author had disclosed his everyday routine. According to which, he used to write every morning as soon after first light as possible.

Nicholas Sparks is one of the most liked romance novelists and screenwriters. All of his books have been New York Times bestsellers, with more than 105 million copied sold across the globe in more than 50 languages.

Sparks published his first novel, The Passing in 1985 while studying at the University of Notre Dame. So far, he has published 19 books. His new book, The Return, will be available by September 2020.

The novelist says a novel takes him a few months to think up and then approximately 5 months to write. The author sets a daily target of 2,000 words for himself.

Holly Black is a writer and editor best known for The Spiderwick Chronicles, a series of fantasy books that she wrote with illustrator and writer Tony DiTerlizzi. In 2014, Black’s novel, Doll Bones received a literary award called, Newbery Medal Honor.

Talking about her productivity, in a Q&A session, she revealed that she tries to write 1,000 words every day. She also admitted that she had been putting up her regular word counts online for her last few novels, which helped her stay dedicated toward her work.

While we have not discovered anything directory form the author, in an interview, she said that when she immerses in the work, she writes from late morning through all afternoon and all evening and produces about 3,000 words.

James Dover Grant is a famous British author known by his pen name Lee Child. He writes thriller novels and is best known for his Jack Reacher novel series. Lee Child says he writes in the afternoon, from 12 until about 6 or 7.

When he writes a book, he tries to touch 2,000 words a day. He says he doesn’t revise his work because he thinks that once the story is written, altering it won’t be right.

So these are daily word counts of some popular writers. If you’re struggling with writing, you must develop a daily writing habit. Check out the following tips.

A lot of new writers think that they need to spend more time writing to be productive, which is not the right idea. There are some steps you can take to get more words done other than spending more time. Let’s get to know about them.

Create a writing schedule and find a productive location

When you sit at the screen at the same time every day, you create a fixed writing schedule that automatically improves your productivity.

Also, look for a place where you can work without any distractions. Find out your most productive working time. Most writers find themselves more productive in the mornings while some at night.

If you’re writing a book, have an outline for your chapter in advance. What should be your day-to-day progress? How far will you go every week? Set realistic goals and stick to them.

Writing continuously for hours without taking a break can drop your overall productivity. Take a break every 30 minutes. It is scientifically proven that people who take short breaks during work are more productive than consistent plodders. We love the Pomodoro technique for setting a work schedule with regular breaks.

Keep distractions aside when writing

Do people message you on Skype? Do social media notifications distract you? Figure out what wastes your time most while you’re writing and shut out all your distractions. You can also try one of these distraction-free writing apps.

As you can see in the above list, daily word counts may vary significantly from writer to writer. However, if you’re an aspiring writer, you must cultivate a strict writing routine. Writing every day will help you with writer’s block and make you more organized. 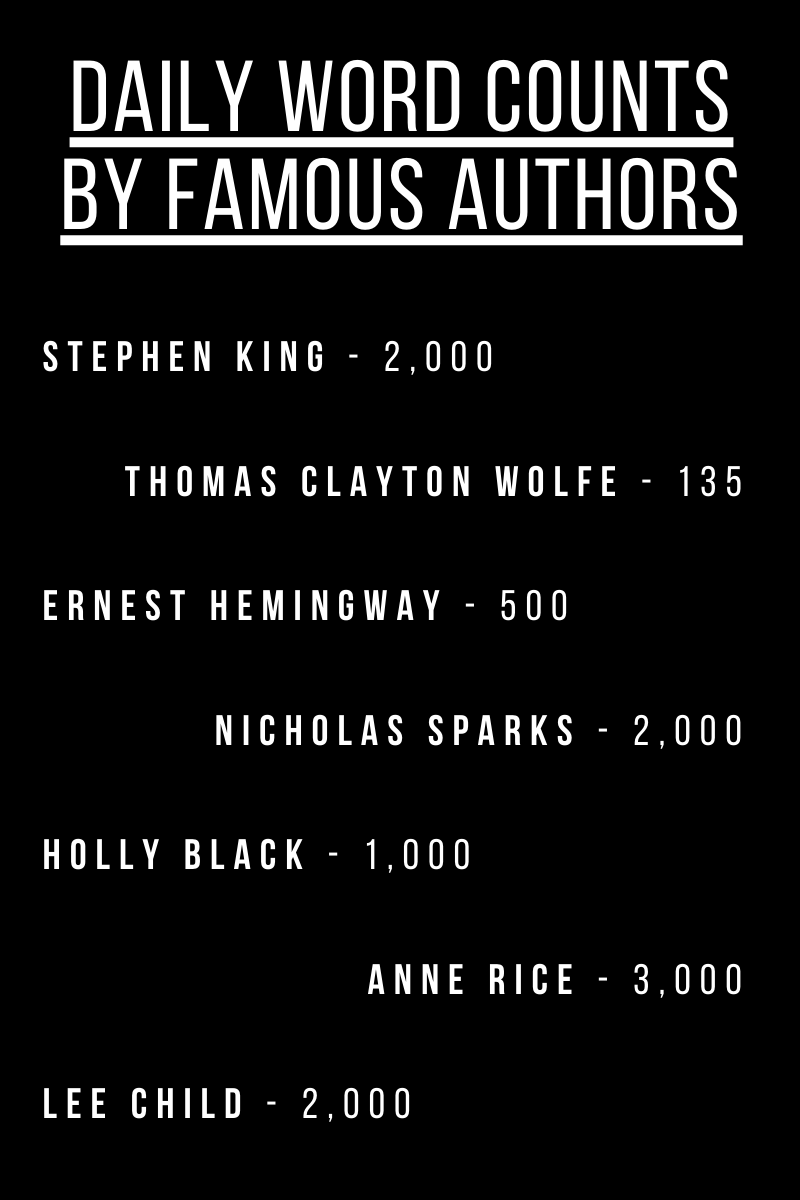 12 Famous Female Poets of All Time and Their Best Poems