How Do You Abbreviate Attorney?

There is only one known attorney abbreviation which is:

Some lawyers will also just use the acronym for their law degree, Juris Doctor, after their name. For example: 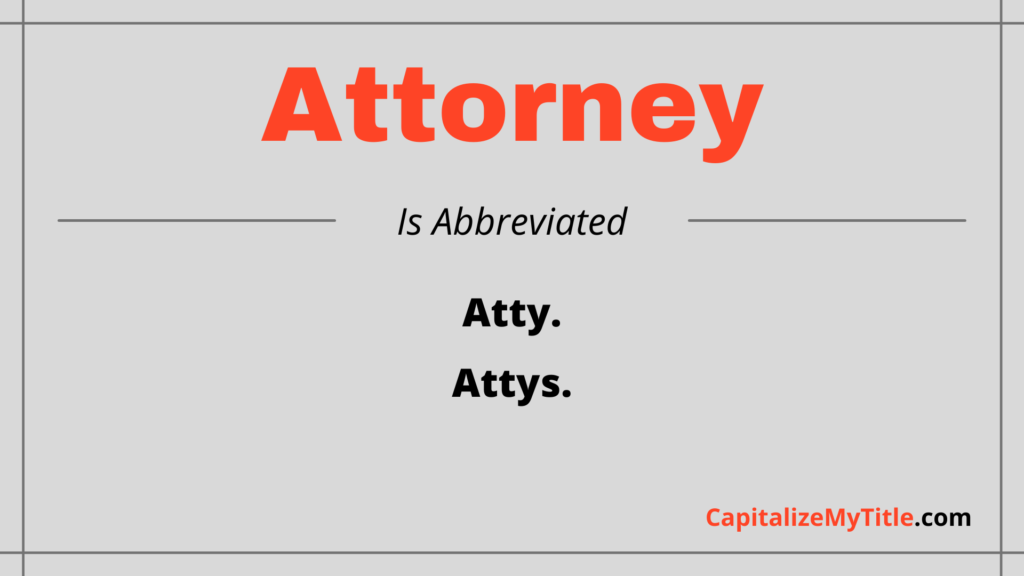 What Does Attorney Mean?

The word “attorney” is itself actually an abbreviated form that is used in everyday parlance for “attorney at law” or “attorney-at-law”. An attorney is a person, trained in law, who is appointed to act for another person in a business transaction or in legal matters.

An attorney can also be defined as a person who practices law as an advocate, or an officer of the court of law with legal qualifications to prosecute and defend court cases on behalf of clients.

Attorney is the usual term used for a practicing lawyer in a number of countries’ justice systems including South Africa, Sri Lanka, the Philippines and the United States of America. However, while all attorneys are lawyers, all lawyers are not necessarily attorneys. A lawyer, in contrast to an attorney, is a person who has trained in the field of law and is able to provide advice and help in legal matters.

The Different Between an Attorney and a Lawyer

While the two words are sometimes used interchangeably, there is a difference between a lawyer and an attorney. According to BKLaw.com, an attorney is qualified and licensed to represent a client in court. A lawyer is someone who is trained in the field of law and provides advice and aid on legal matters. In general, an attorney is always a lawyer but a lawyer is not necessarily an attorney.

There are many synonyms of the word “attorney” and only a select few will be mentioned here. The word has two broad definitions, and therefore its synonyms can be put into two broad categories in accordance with the said definitions as follows:

1. Attorney, defined as a person who is appointed to act for another in a business transaction or in legal matters, has the following synonyms depending on the context in which they are used: agent, commissary, deputy, factor, procurator, representative, assignee, delegate, envoy, minister, proxy.

2. Attorney, defined as a person who practices law in prosecution and defense of court cases on behalf of clients, or provides advice on legal rights and obligations, has these synonyms, again as per context and given jurisdictions: attorney-at-law, counselor (or counsellor), lawyer, advocate, counsel, counselor-at-law, legal eagle, prosecutor, public defender, solicitor.

Some synonyms in common use have rather derogatory connotations. Examples of these are words like: “ambulance chaser” to describe a lawyer who specializes in cases that seek damages for personal injury; “pettifogger” which means an inferior legal practitioner who employs dubious methods; and “shyster” which denotes an attorney who uses unscrupulous, dishonest or deceptive methods in his or her practice.

When to Use the Attorney Abbreviation

The attorney abbreviation “Atty.” is commonly used while referring to lawyers who practice law in the United States. It is mainly observed in legal circles where it can be found in reference to lawyers as shorthand during note taking and in correspondences within and between law firms.

The abbreviation also appears frequently in legal writing such as court documents, law reviews, and on attorneys’ business cards and nameplates. It is also common to encounter such abbreviations in newspaper headlines and titles where there is concern about space. However, apart from this internal use within the legal sector and in news headlines, the attorney abbreviation is not used in ordinary writing unless when quoting from such sources.

Examples of Sentences Using the Abbreviation