How to Use Our Morse Code Translator

Quickly and easily decode morse code or convert text to morse code by following these instructions. We can handle English, German, Spanish, and several other languages as well as various stop words commonly used in morse code.

Our converter works with basic Latin alphabet, Arabic numerals, and punctuation. It also supports some letters from other languages including Spanish and German.

What Is Morse Code?

Long before the technology we use today, the fastest and most efficient way to share information over long distances was the telegraph which provided near-instant communication. Messages were sent on the telegraph through electrical signals. Originally, these signals lined up with compass needles. Those needles pointed to specific grid points that corresponded with the 26 letters of the alphabet. At the time this was the most efficient method of communicating words, but it was complicated.

Enter the American painter and inventor Samuel Morse. He and Alfred Vail, his assistant at the time, developed Morse Code, a more efficient method, which received a patent in 1840. Now messages could be sent by using short and longer signals, and a combination of the two. The longer signals are called dahs and are represented by a dash. The shorter signals are called dits and are represented by dots.

Each letter of the alphabet was assigned a specific, universal signal. Alfred Vail estimated the frequency of letters used in regular communications and assigned more common letters shorter codes in the Morse alphabet. A telegraph operator would enter the message through the series of dits and dahs (dots and dashes). Those messages would be transferred into electrical signals. Those signals would be transferred to another telegraph where another operator would wait to translate the code back into dots and dashes, then into the original message.

The first message to ever be sent on a telegraph using Morse Code was “What hath God wrought”, which was a Biblical reference from the book of Numbers. Morse Code combined with the telegraph became the technological darling of its day shortly thereafter. President Lincoln used it to stay informed of developments in the Civil War, while Western Union found a way to bring families together from across the country through telegraph messages. It soon became popular worldwide as a fast and reliable way to share information and news.

While most of us probably think of Morse Code in terms of sound (you may even hear those distinctive dots and dashes in the forms of beeps in your head right now), you’ve probably also seen Morse Code being used with flashes of light. Quick flashes are the equivalent of a dot and a longer shine of the light represents a dash. A dash should last three times as long as a dot, no matter how you’re signaling.

Today, Naval intelligence trainees are required to learn Morse Code, and amateur radio enthusiasts keep it alive as a hobby. Although it is not used in the official capacity, especially for communication, as it once was, Morse Code is still a universally known and accepted communication code. Although its official uses have diminished, there is no doubt that Morse Code paved the way for the faster, more immediate forms of communication that are being used today.

Use the morse code table below to quickly see how characters translate to morse code. 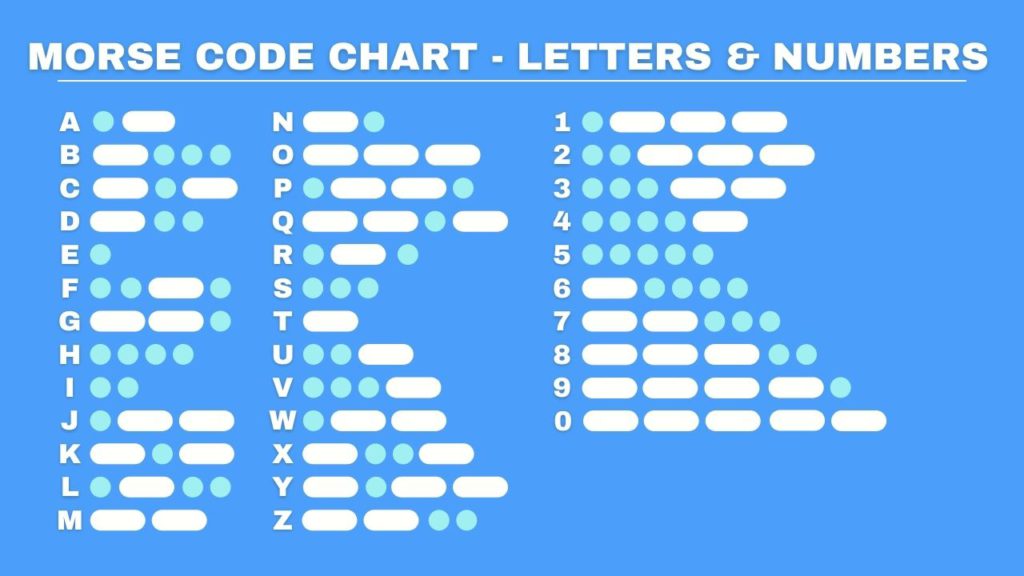 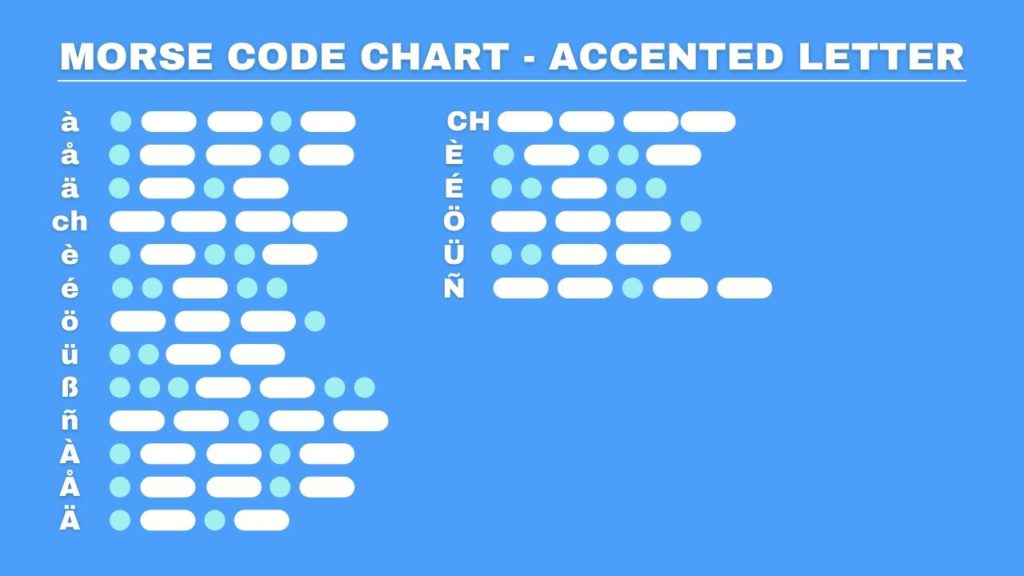 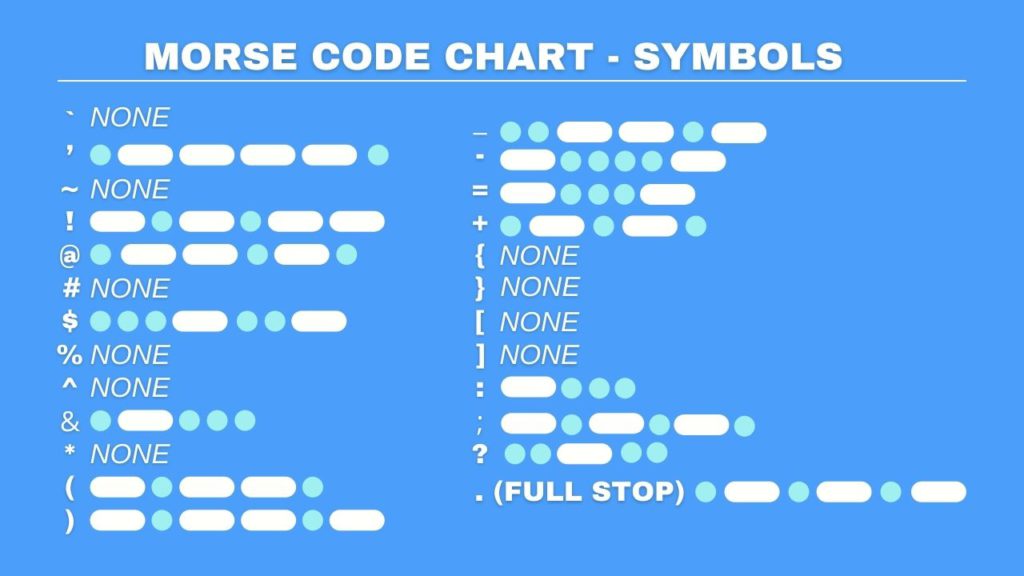 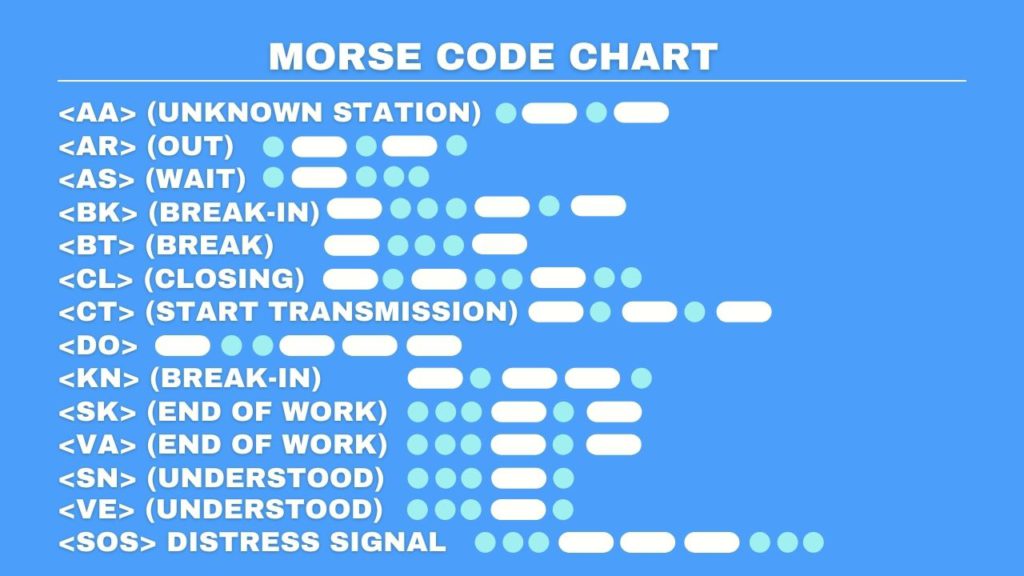