The distinction between megabits and megabytes is an issue of data dimension. Megabyte (MB) and Megabit (Mb) are two units of measurement used to calculate data transmission speeds. Bits are the smallest unit, whereas bytes are eight times larger. They’re both based on a byte, the smallest data measurement unit. A megabit measures data transmission speed, whereas a megabyte is a unit of storage capacity. You might have wondered what does Mbps mean? To understand the Mbps meaning, you must first grasp how computers function. We’ll explore that below and how you can make conversions between these two units.

What Is a Megabyte?

A megabyte is a unit of digital information that is equal to 8,000,000 bits or 1,000,000 bytes. It assesses the storage capacity of computers and other electronic devices. The word “mega” refers to a prefix that means “millions” (as in mega-pixel).

The term “byte” relates to its base-10 size, which means it contains eight digits rather than ten like most other units. If you download a 100 MB file in 1 minute with a 1 MBps upload speed, you may claim it downloaded at 100 MBps. One megabyte represents one million bytes, which seems like a lot, yet it’s inadequate for most streaming services. A standard definition movie file ranges from 2 to 8 MB.

What Is a Megabyte per Second (MBps)? MBps Meaning

A megabyte per second (MBps) is a unit of measurement for how fast data moves. It’s equal to 1,000 kilobytes per second, or eight megabits per second (Mbps). The term MBps is most often used to refer to Internet connections or hard drive speed, measured in MBps.

What does it imply to have “8 megabytes per second”? The figure represents the quantity of data transported each second—in this example, 8 million bytes. If you transmit a 10MB file at 8MBps to another device and it takes 5 seconds, your transfer rate is 5MB/s.

How Do You Abbreviate Megabyte?

Megabyte is abbreviated as “MB” with a capital “B” since it is larger than a megabit. 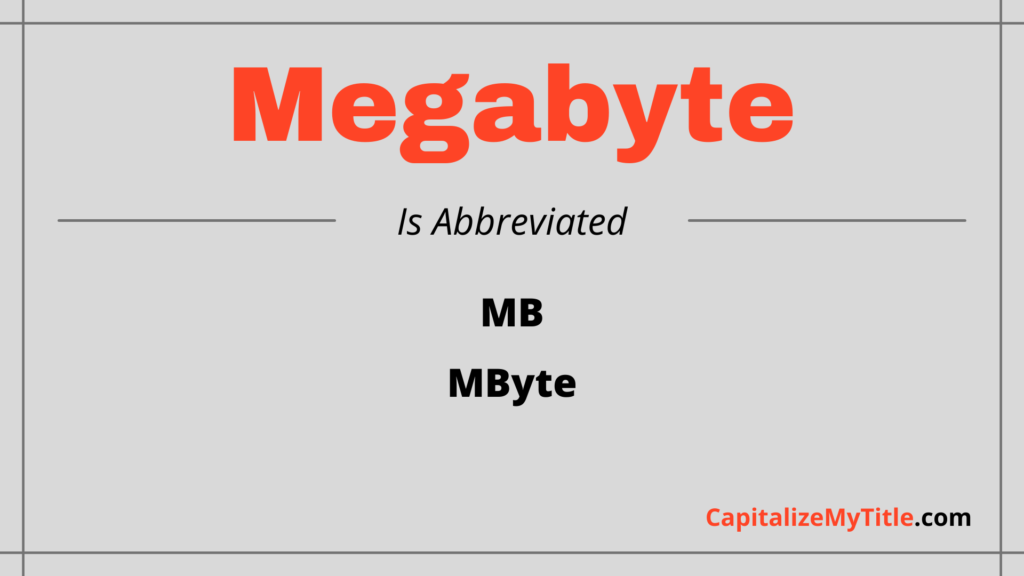 How Do You Abbreviate Megaytes per Second?

There are three main ways to abbreviate megabytes per second:

As with the abbreviation for megabyte, you capitalize the “B”.

What Is a Megabit?

Megabits are the most often used unit of measurement for broadband speed (or Mb). Since 1 byte is equal to 8 bits, a megabit is therefore 8 times as large as a megabyte.

The higher your Mb, the quicker your Internet connection. It is a variant of the primary PC unit, the piece used to gauge data transfer speed. One million bits are close to one megabyte (MB). A megabyte (1,000 kilobits) is one million (million or 10^6 bits) (Kb). 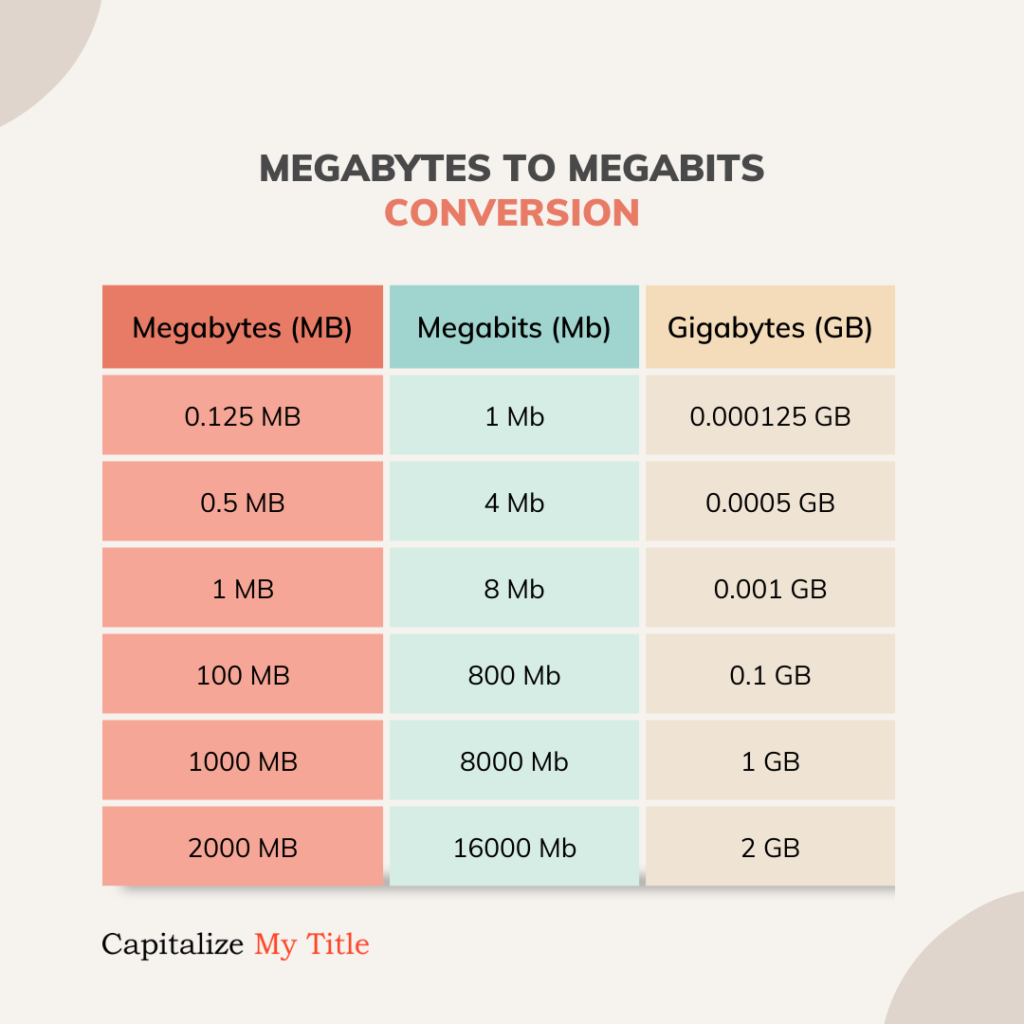 How Do You Abbreviate Megabit?

Megabit is typically abbreviated as:

However, “Mbit” is used in some cases to clearly differentiate it from megabyte (MB). 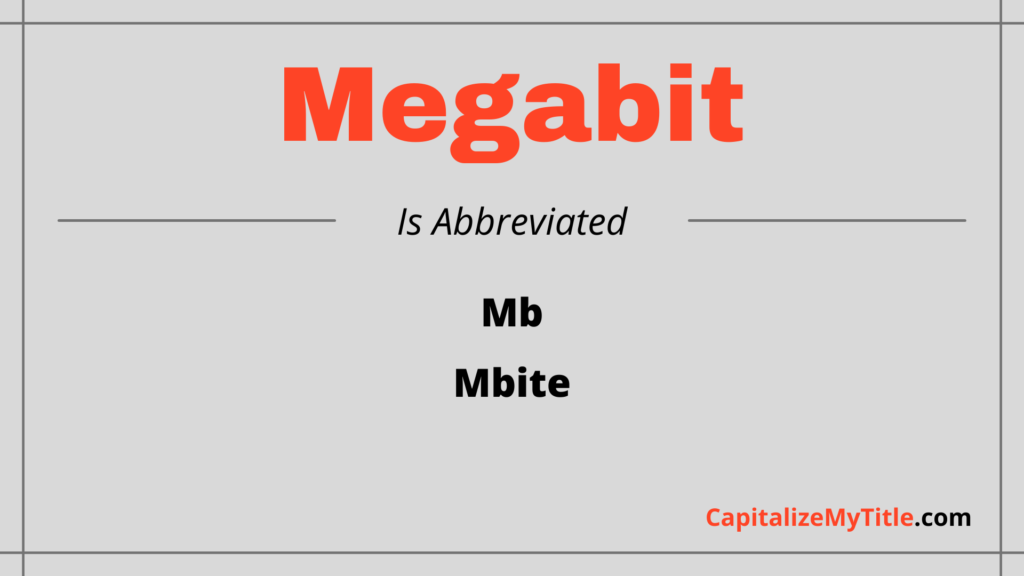 Since a megabit is a smaller unit than a megabyte, it has an abbreviation of “Mb” with a lowercase “b.” Megabits and megabytes are terms used to describe the transmission speed of devices. Application of “Mb” or “MB” is mainly used in the case of hard disks.

How Do You Abbreviate Megabits per Second?

There are three main ways to abbreviate megabits per second:

The “b” is lowercases to differentiate megabits per second from megabytes per second.

When analyzing web speeds, there’ll be the usage of megabits or megabytes transmitted per second. Knowing megabytes vs megabits is essential when dealing with your ISP.
When comparing the web speeds of two specialized co-ops, ServiceA can provide 8 Mbps, whereas ServiceB can provide 8 MBps. This is crucial in understanding the Mbps meaning. They may seem similar at first glance, and you may choose the one with the fewest options. After transformation, ServiceB has a speed of 64 Mbps, several times faster than ServiceA.

Choosing the least priced help always results in the purchase of ServiceA, but if you want faster speeds, ServiceB is a better choice. As a result, grasping the difference is critical.

What Is a Megabit per Second (Mbps)?

You must have heard of the phrase megabit per second (Mbps) and wondered about the Mbps meaning. It refers to a data transfer speed measurement (bandwidth) and represents the quantity of data delivered in a certain period. For example, if your internet connection is 1Mbps, you can download one megabyte per second. If your internet connection has a capacity of 100Mbps, you can download 100MB per second.

A computer network interface card (NIC) often has an Ethernet port that monitors megabits per second (Mbps) bandwidth. Your Internet Service Provider (ISP) will also mention its speeds. For instance, 10/20Mbps or 50/100Mbps, implying that its clients will access such data speeds, depending on how busy their servers are.

How Many Megabits per Second Equal 1 Megabyte per Second?

MegaBits and MegaBytes are both used to measure data transmission speed. However, it is crucial to note that the two terminologies are not interchangeable. One Megabit is equivalent to eight Megabits. The easiest way to get the Mbps meaning is that there are eight times more MegaBytes in a second than MegaBits. Megabits per second (Mbps) measure internet and mobile data transmission speeds.

So, how many MegaBits equal one megabyte? That depends on the speed of your internet connection! If you have a 100 Mbps connection, you will receive 10 MBps (or 8 Mbps) of speed. 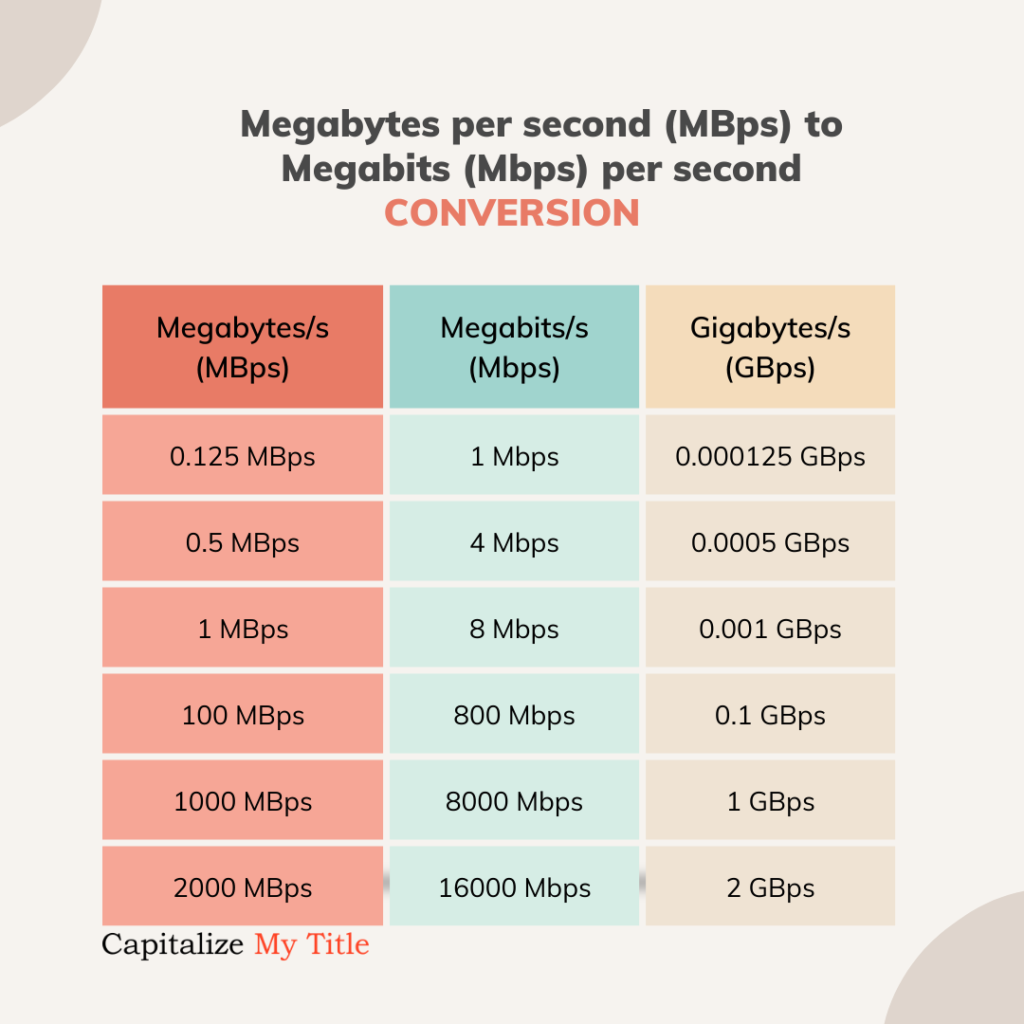 The other way around is more straightforward: divide the number of megabytes per second by 8. So, if you have a connection that downloads at 80 MBps, it downloads at 10 Mbps (10 megabits per second). You view 250 Megabytes of information stored on a server when downloading a 250 MB film edit over the internet. It will store this complete informative index on 250 Megabytes of hard disk space over the internet. It is critical to remember that online files are always measured in bytes, kilobytes (1 KB = 1000 Bytes), or megabytes (1 MB = 1000 Kilobytes).

Difference Between Mbps and MBps

For example, if your favorite HD video is 12 GB in size, downloading it with a 10 Mbps web link would take three hours. However, if you had a 500 Mbps online link, you could watch your movie in under three minutes.

We measure the download or transmission pace of a document in megabytes per second (MBps). AT & T TV recommends 25 Mbps for live TV streaming, removing the need to download and save a record. However, the download speed of the document will be 100 MBps when downloading a computer game.

After reading this article, you should now have a pretty good idea of what megabits and megabytes are and the Mbps meaning. We measure the data transmission rate in megabits per second (Mbps). Megabytes (MB) are a measurement of information volume. Divide a bit value by eight to convert it to a byte value. It is critical to understand the distinction between bits and bytes when discussing innovation. It may also enable you to make relevant technical help or customer service requests. 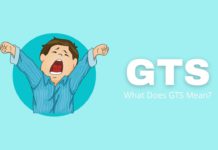