What Is the Association Abbreviation?

There are two abbreviations for association:

Unlike other examples of words with different meanings and abbreviations in this case there’s no real difference between the abbreviations. 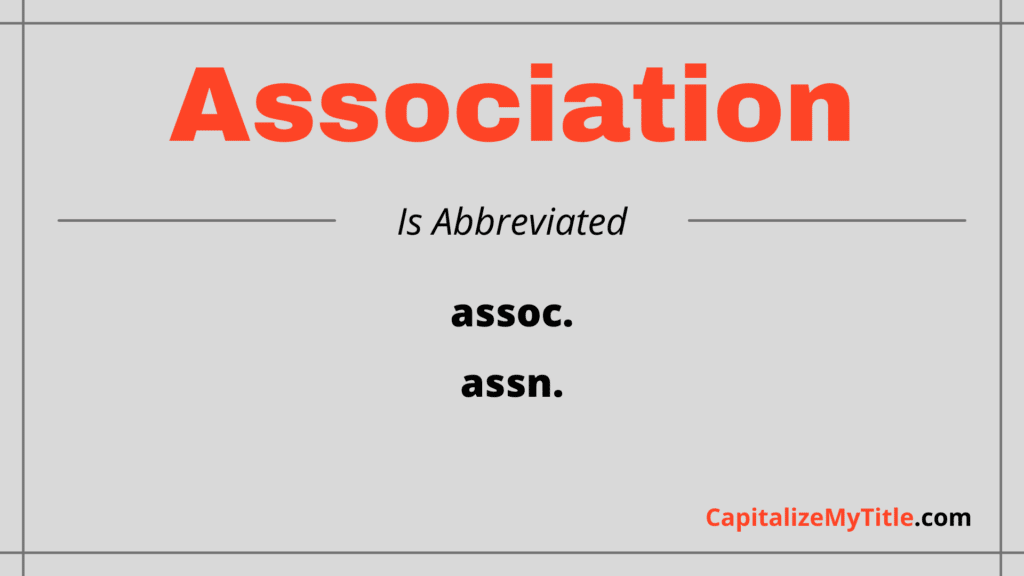 Both association short forms (assoc. and assn.) are completely interchangeable and can be used freely regardless of the context and intent. That said assoc. is by far the more common of the two, likely because it’s closer to the original word, as such while assn. is correct not everybody might understand it on its own.

Also, while “association” does have a plural form the abbreviations don’t count with one, and you can use them normally both for the singular and plural.

There are quite a few ways to define the word association, but thankfully they all go back to a single common element, so it’s easy to keep track of them.

The first definition for association is: A group of people who form a single organization with an established structure and goals. In this meaning we can find the sports associations for example, and this is in general the most common use of the word in English.

So there’s quite a few ways to use the word, but it always goes back to multiple people or elements being related to one another, that’s the main thing to keep from these definitions.

Due to how many meanings association has there’s a long list of synonyms to keep in mind for it, amongst them are the following: Corporation, Cooperative, Guild, Partnership, Society, Combination and Affiliation.

That said it’s important to keep in mind the context as words that might work for one meaning of approximately but not all of them. So make sure to properly grasp which is the proper intent of the word in this context.

When to Use the Abbreviations

Association follows the general rules of abbreviations, which means that there’s really only one real reason to use them, and that is saving space. The point of abbreviating a word is being able to save on the character count when it matters, so generally speaking, you’ll only see the abbreviation of association in places such as newspaper headers, long reports, and other areas with limited space like posters, presentation cards and infographics.

As we mentioned before there’s no real difference between either option, and both are accurate, but if you are using the word in a casual setting it might be better to rely on assoc. as it’s just way better known than assn.

Some examples of when to use the abbreviations: