Favourite or favorite? Both spellings are correct. The “ou” spelling of the word is used in British English, Canada, Australia, and New Zealand. On the other hand, “favorite” applies to the American English language.

You can only misspell the word if you use the American spelling in British writing, and vice versa.

The versatile word “favorite” gets used in English as three different parts of speech. It can function as an adjective, verb, or noun. Traditionally, it only existed as an adjective or noun, but in the 21st century, we also use it in a verb form. Neither its spelling nor its meaning changes its pronunciation – (FAY-vuh-rit or FAY-vrit).

Fun Fact: Although two pronunciations exist, they’re both correct. How you learn to say and spell the word comes down to where you grew up and learned to speak.

The definition of favorite describes something or someone well-liked. It might refer to a highly regarded person, thing, or place. The word also refers to signaling your preference for a social media post or bookmarking a website for later reference. Let’s look at when it means each of these definitions.

As a noun, favorite refers to the competitor favored to win or a highly-regarded person or thing. For example:

As an adjective, favorite refers to a person’s most treasured person or item. For example:

• I favorited every photo she posted of her vacation cruise because they all showed such breathtaking vistas.

As mentioned earlier, the words “favorite” and “favourite” are correct. If you are in the United Kingdom, the spelling of the word is with the letter “u.” This is because, in British spelling standards, the letters “o” and “r” are separated by the letter “u.”

For instance, in America, we spell “flavor,” whereas, in the UK, the word is “flavour.” The same spelling standards for the following words:

So, as long as you spell favourite or favorite the standard way in which country you reside, you are correct.

Two dictionaries settled the debate of whether to spell it with a “u” or not.

The two dictionaries cemented what evolved as the common spelling in each location.

Another trick you can try is remembering that the word “or” is for Americans, whereas “our” is for Britains.

If you still need help with the correct spelling, you can use the word’s synonyms, such as well-liked and best-loved.

When spelling “favorite” or “favourite,” understand that both spellings are correct. It depends on where you live or the client you write for.

Over 250,000 Americans Misspell “Calendar” According to New Study by QuillBot 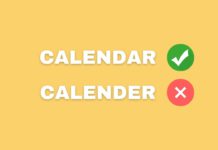 Over 250,000 Americans Misspell Calendar According to New Study by QuillBot