Wondering how you abbreviate months of the year or simply the word “month?” You’ve come to the right place to learn.

What Are the Months of the Year

You probably came to this page to learn what the months are in order so here you go:

In English-speaking countries, here is a list of months of the year in order:

We used our comma separator tool to create this list:

How Many Days Are in Each Month

How Do You Abbreviate Months of the Year

However, when it comes to the individual months they each have their own abbreviation and they are far more prevalent in day-to-day use. The abbreviations of the twelve months are listed as follows: 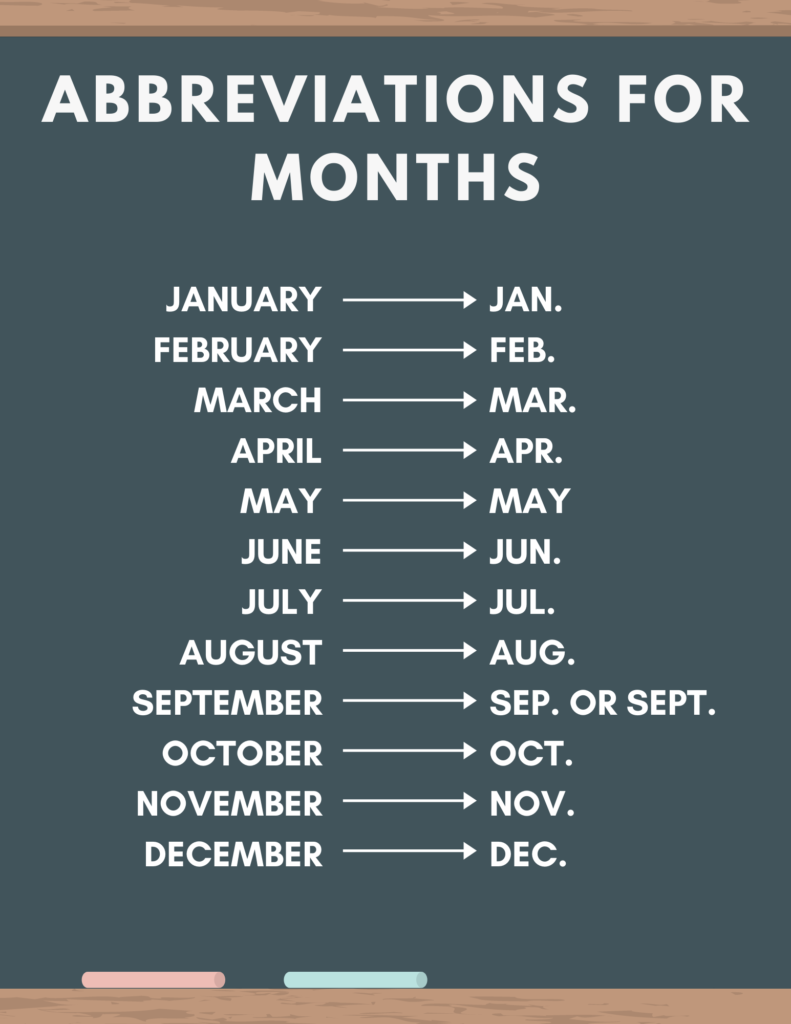 The general rule to abbreviate each month is simply to take the first three letters in each one, which makes it easy to remember and to put into practice.

Two exceptions technically exist, the first being May which is only three letters long and as such arguably has no abbreviation. And then there is September, which can be abbreviated as Sep, but is also abbreviated often as Sept. which has four letters instead.

All in all, the three-letter rule works perfectly fine for all months and should be kept in mind.

When to Use the Abbreviations

Abbreviations, as a rule, are only meant to be used when it’s important to save space or avoid constant repetition. What this means is that the above abbreviations will likely see use mainly when it comes to newspaper headers, printed articles, specialized reports with extensive length and presentation cards. Any context where saving space is relevant will make a great place to use the abbreviation.

Additionally due to their importance when it comes to dates and times the abbreviation of the months can be common in calendars and any sort of displays that give the date, like those found in clocks and phones.

Additionally, certain style guides have very specific rules for abbreviating months. These rules for MLA and APA include:

Some Examples of When to Use Abbreviations

About the Word Month

How Do You Abbreviate the Word Month

The short form of month is usually abbreviated as MTH, however as the purpose of an abbreviation is to save on space and month itself isn’t too long of a word it’s rare to see this form used. MTH is usually relegated to small displays particularly in clocks and calendars.

The abbreviations of “month” are:

A month is defined as a period of roughly four weeks, which makes up one of the twelve periods that form a year.

Due to the various differences in the exact amount of days each month has there isn’t a meaning based on a specific length, but the main factor in the definition is always the notion that a month makes up roughly one twelfth of the year.

Technically speaking the word, the word month doesn’t have a synonym, and neither do the individual months of the year. This is largely because they are proper nouns, and that’s the only word required to refer to the concepts.

Based on the context it might be possible to use words such as Date, Past or Weeks as replacements for month. But in these cases it’ll be more due to the associated context of the phrase, not because they are direct synonyms of the word month.

Here is a list of Hijri, Arabic months you can copy:

Here is a list of the Hindu calendar months in order:

What Are the Solar Months in Astrology

What Does WYM Mean?