Home Blog Books What Are the Most Read Books in the World of All Time?

A book is something that can change your life while transporting you into another world. Whether you love non-fiction or fiction, there is a perfect book for everyone. We’ve got all you need to know about some of the most popular books of all time. You’ll learn about the significance of each book and get a glimpse into the reasons it may have changed someone’s life. We’ve got a list of the most read books in the world of all time.

The Holy Bible is the most read book in the world. In the past 50 years, the Bible has sold over 3.9 billion copies. It is the most recognizable and famous book that has ever been published. The Bible is a collective book with many different preachings based on God and the Lord Jesus Christ. It is the book used for worship for Samaritans, Christians, Jews, Rastafari, and other religions. It is divided into the Old and New Testament. After His resurrection in the New Testament, Jesus goes on to teach the world about the Christian religion. There are prayers, hymns, historical accounts, parables, prophecies, and many more stories in the Bible. 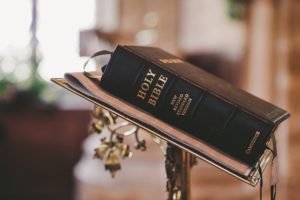 The Quran is believed to be the words straight from God, Allah. It is the book that the Muslims use as a guide full of religious texts of how they should live their lives. The Quran has 114 chapters, which were given to the people over a period of 23 years to the Prophet Muhammad. It tells Muslims the ways to live both right and wrong. The Quran is the most read book in the world by the Islamic community. They are to learn the passages and recite them to live a good life. It is also the most recited book of all time.

The Harry Potter series hit 500 million sales in 2018, and it’s only grown from there. These books are at the top of the list as the only ones with known science fiction elements. One ironic thing about this series is that numerous publication companies passed on it stating that these fictional fairy tales full of witchery and sorcery wouldn’t fly off the shelves. Boy, were they wrong. The Harry Potter series has not only sold millions of books, but also went on to be one of the most popular film series of all time.

This book may take some people by surprise. The Quotations from Chairman Mao Tse Tung is a compilation of sayings by the former chairman of the Communist China Party. This book sold over 820 million copies in the past five decades. It is also known as The Little Red Book. In today’s world, this book is given as a gift as a symbol of wisdom. It is so popular that words from the book that were painted on the Chinese village walls during the Cultural Revolution are still there. At one time, this book of quotations was the most visible icon in China. In almost all paintings from the 1960s, characters were seen with this book. It is a book of nostalgia for many in China. There are different editions available today.

The Lord of the Rings

The journey of Frodo Baggins has been read by so many people that in the last 50 years, it has sold 103 million copies. The books sold count includes the trilogy of books: The Fellowship of the Ring, The Two Towers, and The Return of the King. No doubt much of these sales came after the world-famous movies were released in the early 2000s. These books together have a word count totaling over half a million.

The Alchemist is a novel written by Brazilian author Paulo Coelho that was first published in 1988. It has since become an international bestseller having sold over 65 million copies. The masterpiece tells the magical story of Santiago, an Andalusian shepherd boy who yearns to travel in search of a worldly treasure as extravagant as any ever found. The story of the treasures Santiago finds along the way teaches us, as only a few stories can, about the essential wisdom of listening to our hearts, learning to read the omens strewn along life’s path, and, above all, following our dreams.

The Diary of Anne Frank is one of the most influential, educational, and popular books of the twentieth century. Millions of children in school read the book each year, while millions of adults read it for pleasure each year as well. Since 1947, this personal account by young Anne Frank has done its best to change the world. When Germany invited the Netherlands in 1940, Anne Frank and her family hid in a warehouse. Anne kept a record of her awareness of the war and told about everyday events they faced in hiding. She didn’t hold back on her fear of being captured by the Nazis. The sad truth is that the Frank family was found in 1944 and sent to Nazi concentration camps. The author of the diary passed away before she was 16 years old. Her father, Frank, was the only survivor. This book is a piece of history and a glimpse into one of the worst times in that history. It also portrays the hope a little girl held on to when the world around her was crumbling.

The Twilight Saga is a fictional series that follows the love story of a vampire and an everyday girl. This series doesn’t just dive into the stereotypical world of forbidden love between species but talks about family and emotions. The main girl, Bella, is torn between love for a werewolf and a vampire. The Twilight Saga series has sold over 120 million copies. The books also went on to be a string of hit movies. The underlying theme of the books and movies is that love has no barriers. You can be from different worlds, yet part of the same soul. It has been translated into over 35 different languages.

Gone With the Wind: Margaret Mitchell

Gone With The Wind is a fictional love story that takes place with a historical background. The book has sold over 30 million copies. The young daughter of a plantation owner is trying to find get out of her dreary life. She falls in love with a man that is married to his cousin. She marries a man in hopes her life is better than ever. Many people believe Gone With The Wind is one of the most perfect novels of all time. Many people study its historical background and love story. It went on to be one of the most popular movies of all time. Ironically, the book is the only book ever written by Margaret Mitchell.

Think and Grow Rich was first published in 1937. Now with over 100 million copies sold, its legacy lives on. This book addresses the highs and lows of life and how to handle them. It teaches you that you can get out of the lowest lows. Hill claims it was inspired by Andrew Carnegie, a famous businessman. Some people see it as one of the best books of all time to pull you out of depression. It will help you see the positive side of things in life. It will help you realize the person you are deep inside of letting you focus on the negative side of life. The book title may lead to some to believe it’s all about income, but the book is much more about philosophy and the inspiration of life.

Into Thin Air: A Personal Account of the MT. Everest Disaster: Jon Krakauer

Jon Krakauer was the sole survivor in a 1996 climbing disaster following an earthquake on Mt. Everest. Krakauer shares the stories of his experience both before and after the natural disaster. He was one of the eight climbers that ascended upon the mountain. The others lost their lives, but Krakauer fought back only to show others that they should not fear facing the biggest obstacles in life. He inspired others to succeed after the tragedy by sharing his story on the mountain. Though he made history as the only survivor of one of the deadliest disasters on Mt. Everest, Krakauer proves that life goes on.

A good book will change your life. You may laugh and cry every few minutes. A book may lead you to make new decisions in your life. It may lead you to see the world in a different way. These most read books in the world of all time are just a few places to begin your journey through books.

The designer Jared Fanning published an infographic of the most read books in the world, based on research done by writer James Chapman. 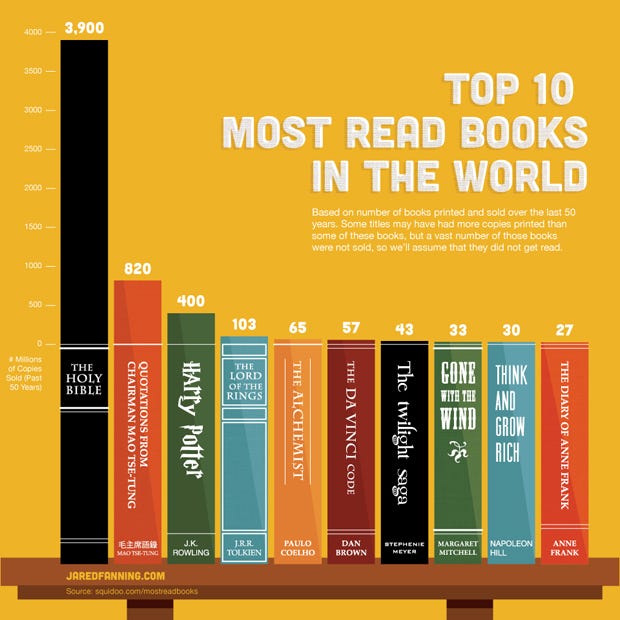